I was wandering around in blogland this afternoon, putting off my first "long run" of this training plan and I came across Casey's Virtual 10K, scheduled for today. It was obvious that this was the kick that I needed to get out the door and moving.

I've never participated in a virtual race before, but the general gist is just that you run the distance and then send in your time to the organizer. Casey has taken this even one step further and is offering knitted prizes! I don't think I'll be getting one of the fastest time prizes, but maybe I'll get one of the "random" finisher's knitted wrist warmers. I would be pretty jazzed about that.

Anyway, I had an amazing run! I have only run about 5 times since October and was a little concerned that it might be a stretch to run 6 miles.

Since this was a race, I had to locate my sports watch, which I haven't used in years. (You can tell I have a real dedication to speedwork, right? When I studied abroad in Spain, I forgot to pack my watch and was too cheap to buy a new one. So I ran for 3 months without one and learned to really love just listening to my body and gauging my own speed. I usually glance at a clock before and after a run to get a general time, but I get distracted looking at my time if I wear a watch and my run seems to take FOREVER. Same thing with the treadmill clock.) Even though I've moved approximately 7 times since I last wore this watch, because I remembered seeing it in a bag mentally labeled "Things I don't really know where to put" when I was looking for something else a few months ago of my extreme organization skills, I knew right where it was. Unfortunately, it was dead and even after several resuscitation attempts (I ended up taking apart the watch trying to change the battery...), I just gave up.

Luckily, I remembered the stopwatch feature on my Blackberry and just hit it on the way out, leaving it by the door. I just had a nice steady run around town and am just overjoyed that I can still pound out 6 miles without event. I really credit the Virtual 10K with my pace though...if I didn't have that motivation, I probably would have gotten lazy and walked some. 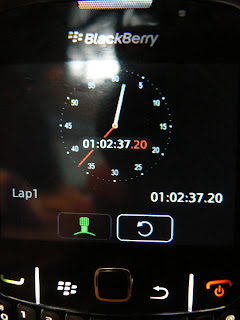 As, it was, I was very pleased with my time and am starting to feel like a runner again!
Posted by Running 365 at 5:10 PM