With my ginormous blister healing up nicely (I was pretty worried it was infected...it was red and painful and just generally gross) and my quads no longer sore, it is more than time for me to hit the road this afternoon.

And I will...after I finish this post and maybe grade a few papers.

I've been meaning to share my mid-run fueling experiences though and wanted to see if anybody had some suggestions. Until my last two long runs, I have never used any kind of energy gel or beans or what-have-you at all. In fact, I mostly have tried to avoid the Gatorade at water stations during half-marathons. I just had this hang-up about taking in calories while I was trying to burn them. It didn't make sense to me.

Well, I got over it. I've accepted that (obviously) my body is going to be able to perform better during 10+ mile runs if I have some kind of calories during the run. I knew that I would need some kind of energy to survive 26.2, for sure.

So, while I was home at my parents' (remember? the promised land of 5Ks and running partners and proximity to running stores?), we went to a wonderful running store in Charlotte and I loaded up on a sampling of energy products. I used them about every 4-5 miles during my 13 and 20 mile runs the past two weeks.

I was advised to take the gels gradually and drink water while doing so. I timed my fuels so that I could pick up the gel and water bottle on the porch then run a mile around the block while getting it down. Which worked pretty well, except that I had such a hard time getting down the whole package of 100 calories! (Mark this as the one and only time I'll complain about not being able to finish my food.) Out of the five I tried, I could only completely finish two over the course of a mile.

This is not scientific at all (I think a lot of it had to do with what point I was in my run) but here's what I thought about each of them. 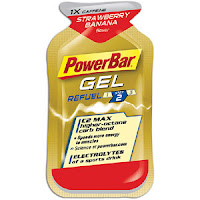 The strawberry banana PowerBar gel was pretty tasty (think smoothie), but it was a little heavy. I was not quite about to finish it. 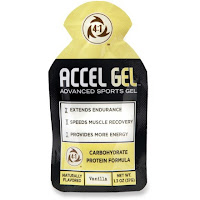 I will not be purchasing an Accel Gel again! The taste was okay, but the texture was really thick and kind of gritty. I could not even get down half of the package.

The Sport Beans were the surprise winner of my unofficial test! I really did not think I would like eating jelly beans while running, but they were actually the easiest to get down. It might have just been coincedence, but I had the biggest energy boost after these as well. 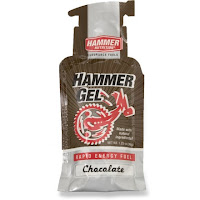 Even being the chocolate addict that I am, I was unsure about eating liquid chocolate during a run. The Hammer Gel was pretty delicious (it reminded me of the syrup that comes in those brownie mixes, but a little more bittersweet), but was a little too thick and I couldn't get down all of it. And I got chocolate on my hands. Which I normally don't complain about, but it was kind of sticky and gross at mile 8. 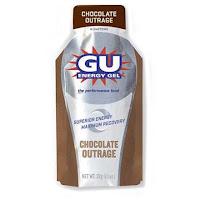 The GU Chocolate Outrage was my favorite gel. It was a little sweeter than the Hammer Gel and not as thick. The girl at the running store warned me that it was a little too much chocolate for some and did not settle well with their stomachs. My stomach, being quite acclimated to large doses of chocolate, did quite well with this. This was the only gel I was able to get all the way down.

Does anyone else have a problem eating the whole pack? I thought spreading it over a mile (9-10 minutes) and drinking water was more than enough time. What kind of fuel do y'all use? Do some long-distance runners just use Gatorade?