We took the lake!

I just arrived home from a lovely weekend at the nearby lake with both my own family and in-laws. I feel very, very fortunate that I grew up in a wonderful family, married into a wonderful family, and both of these families are even able to socialize with each other! (Right before we broke out the sparklers and exited our wedding reception, our photographer pulled my husband and I aside for a couple quick shots and told us, "You both have such nice families. And they even get along and seem to be happy together! Nobody was stressed out or pushy or anything. I don't see this very often." Since this guy had been to more weddings that year than most attend in a lifetime, I took that as a pretty good indicator.) 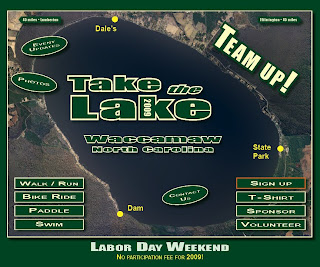 My family's trip down here, as per usual, was in part prompted by an athletic event. Every Labor Day weekend, athletes, mostly local, gather at Lake Waccamaw to "Take the Lake." This year was the first year that it has been truly organized and advertised, complete with water stops, porta-potties, online registration, and even Twitter! Between both of our families, we pretty decently covered the event. Here were the offerings and the participants:

Saturday, 8 AM
Run/Walk 15 miles around the lake

My mom and I ran and were pretty pleased with the result. I haven't run this distance in 3 years and my mom had never ran this far. Part of it was through wooded and sandy trails, so it's hard to translate to marathon pace time though. I finished in 2:57, which is about 5 miles per hour. If I'm able to be just a tad faster than that on October 18th, I might be under 5 hours for the marathon. My mom wasn't far behind. (I'll give the full race report later this week.)

My husband and father-in-law both completed the 15 mile walk and my mother-in-law and several family friends walked part of the way.

(Without being part of the official event, one of my sisters accidentally biked around the lake that morning as well.)

Sunday, 8 AM
Bike 15 miles around the lake

I worked on grad school work and skipped out on the bike, but my youngest sister, dad, mom, mother-in-law, sister-in-law, and her boyfriend all biked. They kept stressing throughout the weekend that these were NOT RACES, but that kind of motivated my mom and a few of the other competitive bikers and they raced tightly along (even through the woods where they had to run pushing/carrying their bikes). My mom was 3rd overall and the first woman to finish, which makes us very proud, and also makes me glad that I was at home typing instead of trying to keep up with her.

My mom and father-in-law were interested in this event, but a little concerned about how boring kayaking in a giant circle for 4 hours might prove to be. They started, but encountered very choppy water an hour or so in, and bailed. We watched the other paddlers from the pier, as they passed several hours later, and once again, I was glad I sat that one out.

Monday, 8 AM
Swim 4 miles across the lake

Unfortunately, there was not a representative from our family in this event. I swam the lake 3 years ago. It was the most athletically challenging thing I've ever done and I'm a pretty decent swimmer. (I have a lot more skill as a swimmer than a runner, actually. In my wildest dreams, they would build a YMCA here and I would faithfully swim every day.) Next year, I think I'd like to conquer the swim again.

In any case, our two families together circled the lake 11 times this weekend! That's 165 miles, if you were counting. Hope y'all enjoyed your labor day weekend too!