Today, still all sweaty and gross from my morning run (I am running- I've just been too lazy to keep up with dailymile), knowing that I should be mowing the lawn, but wanting to do anything but, I went up to the attic to crack open my "childhood mementos" box. I was looking for a tape that my parents recorded about me for a sixth grade project. The only thing I remember from that tape is my dad saying I "have a low tolerance for pain," which , in retrospect, sounds like a really creepy thing to say about a child, but I guess in my dad's recent memory was an episode of me getting a splinter and howling as my mother the unforgiving doctor removed it.
Before I could late the tape, I laid my hands on an equally exciting discovery- my diary from grades 2 - 9. 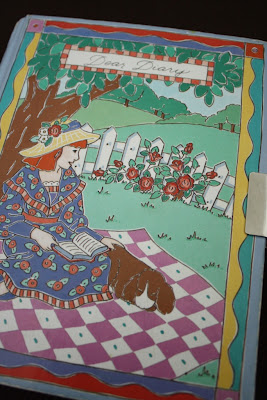 After spending 20 minutes skimming back over those pages, equal parts amused and embarrassed, I've come to several conclusions.
1. I need to be keeping a journal. (I know I've got this whole blog thing, but I'm just never going to lay it all on the line here.) Yes, the middle school obsessions about boys and the use of the word, "phat" is kind of painful to read, but it's worth it for the gift of being able to look back to those earlier versions of myself.
2. I have always loved writing, had a quirky tone, and overused parentheses.
3. People don't change that much. At least I haven't. I have always been fearful of losing memories, 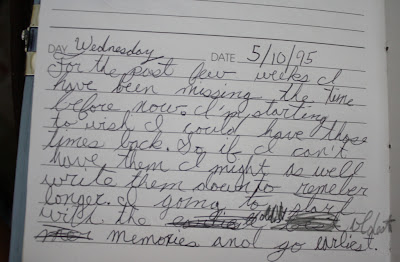 (I then proceeded to ramble on about my haircut in preschool and my best friends in each grade), a little neurotic/dramatic/emotional (That's my first first diary entry when I'm in second grade. Paranoid much?),

obsessed with my weight (I bragged about losing 6 pounds when I was 8), had jealousy issues (apparently, my best friend Ashley got a letter congratulating her for good grades in third grade, even though my grades were just as good as hers), and surrounded myself with "best friends."
4. I had a charmed childhood. Despite my neuroses and my inability to get the stars to aligh to match me up with a boy I liked who liked me until well past the end of this diary, I had year after year of best friends, camps, slumber parties, family trips, school dances, and favorite teachers. Literally, the worst thing that ever happened to me (according to me in seventh grade) was when Earl, a boy I had a crush on and sat with on the bus, moved away and I didn't get to say goodbye because I had tennis practice that afternoon. Really? That's charmed.
5. When my future children get old enough to scratch out words, the very first gift I'm giving them is a diary with a lock. They will be instructed to never tell anyone the code and to hide it in a place Mommy would never look. It's going to take every ounce of self-control I have not to sneak a peek, but I want them to be free to write whatever they want. Even if it's misspelling how "cruel" my parents have been.

I sound pretty smug about that reading group and getting chosen first by my smart crush in Seven Up. This must have been before I didn't get the letter about good grades when Ashley did.

This is me describing the guy I had a crush on in middle school. He sounds like a real keeper, right? 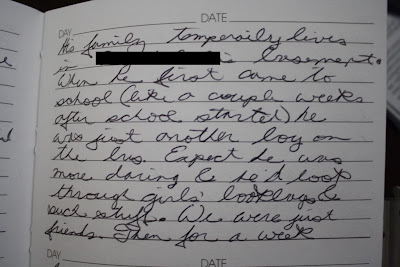 This made me laugh harder than anything else. Apparently I wrote this note to the boy I liked in sixth grade that I obviously was never going to send, but it must have been cathartic for me to write it because I saved it in my diary. You can tell it was the nineties by the unashamed use of Printshop Deluxe. 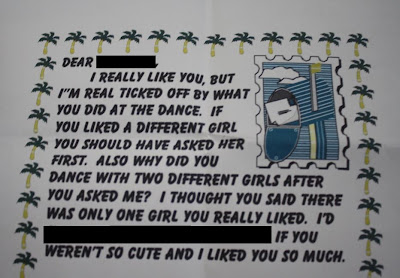 Okay, I might have laughed even harder at this. It sounds disgusting, but I guess at the time, my sister and I thought that was good eating. (After we got our computer, 'a Gateway 2000' as I bragged in 1995, I would occasionally type my entries and fold them into the diary.)

Anyway, this probably cracks me up more than anybody else, but I hope it inspires someone else to dig up their childhood diary or start their own!
Posted by Running 365 at 10:02 AM