How I Became a Warrior and a Biggest Loser in 1 Week: Part 1

I'm not sure if I'm coming or going blog-wise. I just don't seem to be able to fit it in right now.

I did want to quickly tell you about my 2 quirky races this month: the Warrior Dash and the Biggest Loser 5K Endurance Challenge.

Two weekends ago, I flew up to New York for the weekend to see my best friend who's working on her PhD up there and we decided to round out our time together with a 3.23 mile romp through 13 obstacles. In other words, we wanted to be warriors.

Of course, warriors need weapons (obtained through the Halloween section of Target), warrior paint, black nail polish, and a waterproof disposable camera (for documentation, of course) . We considered going all out with complete warrior outfits, but when you have swords, that pretty much covers it.

There were several waves that started throughout the day so we saw the groups in front of us start and finish. 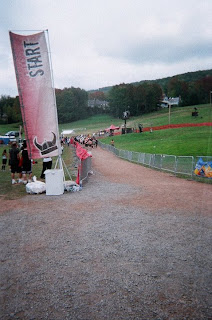 You can't really tell in this picture, but it was ridiculously steep. We were running up a ski slope, for goodness sake. I heard some of the runners who had gone early talk about walking up and kinda thought they were wimps, but after starting out strong for about 3 minutes or so, Sarah and I were definitely walking. I felt soooo out of shape, but it just straight up! Everyone except the really speedy people at the front were walking, so I made peace with it.

It was really crowded, but it started to thin out by the time we got to the first couple obstacles (running through tires and scaling walls). I'm so glad I read Heather's tip about bringing along a camera because it was fun to goof off and grab pictures as we scrambled through tunnels and through "uncharted forests." (The path was actually pretty clearly marked.) Wading through chest-high, chilly, muddy water was actually pretty fun and refreshing after getting up that mountain.

None of the obstacles were really all that extreme and definitely none of them were as difficult as just getting up the hill to begin with. It was a little scary running downhill because it was slick, muddy, and steep and we were a little bit worried about our ankles. 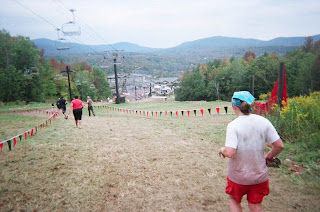 Near the end was the BIG obstacle, the "Warrior Roast." I have been looking forward to leaping over these flames for months! We had to go down this crude slip-n-slide that ended in a slightly gravely mud pit to get good and saturated before reaching the fire. Instead of passing the camera back and forth to get pictures like we did for the other obstacles, we decided to just leap together and trust the professional photographers for this one.
\ 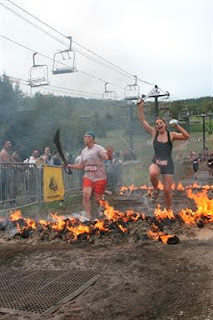 The last obstacle was crawling under barbed wire (that just happened to be suspended over a huge puddle). I've probably climbed under more fences than 95% of these participants so this was no biggie. Even with the sword. 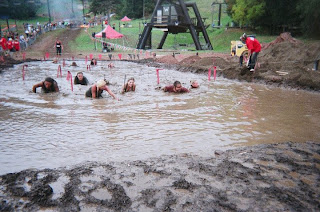 We then celebrated with our warrior helmets, turkey legs, and warrior festivities! It was such a fun race and I highly recommend participating with costumes, friends, the camera, and no regard for your finishing time!

I thought I could squeeze 2 race reports into 1 post, but I think this one's gone on long enough, so I just slapped a "Part 1" into the title and will leave off here. You'll have to check back next time to hear about me getting to run next to Bob Harper in my next race!
Posted by Running 365 at 10:25 PM